skip to main | skip to sidebar

Bruins Sweaters of the Past #6: Andy Moog 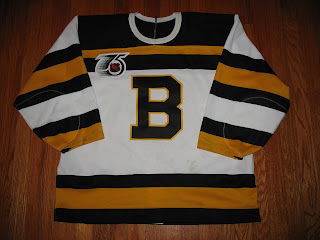 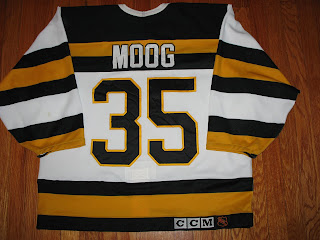 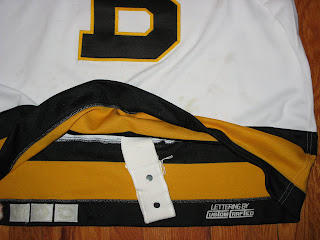 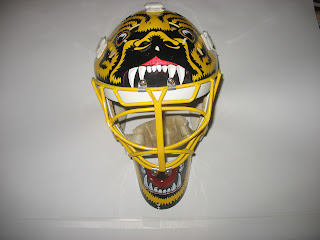 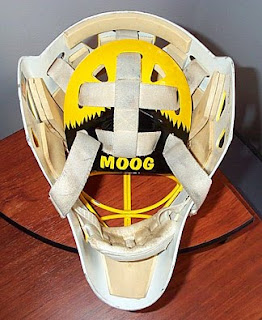 DONALD ANDREW MOOG ("ANDY")
GOALTENDER #35
BOSTON BRUINS 1987-88-1992-93
Born: February 18, 1960 in Penticton, British Columbia
5-8, 175
Games: 261 Minutes: 15,056 Wins: 136 Losses: 75 Ties: 36 GAA: 3.08 Shutouts: 13
Andy Moog is one of my all-time hockey idols after Gilles Gilbert and Mike Liut, who were my first hockey heroes in the 1970's.
Moog was traded to the Bruins after the Calgary Olympic Winter Games on March 2, 1988 for Geoff Courtnall, Bill Ranford and a second-round pick. The former Edmonton Oilers goalie had spent much of his career as Grant Fuhr's backup (though he was in net when the Oil clinched their first of five Stanley Cups, this one against the New York Islanders in 1984) and had three Stanley Cup rings to show for his time there.
Moog wanted to be a No. 1, so he left Edmonton after the 1986-87 season to join the Canadian National Team and played in the '88 Olympics, where he split time with youngster Sean Burke. At the time, it was widely believed that then-Oilers GM Glen Sather was going to trade Moog to Pittsburgh, but for whatever reason (likely Sather's asking price, which was steep), the deal never happened. Enter Harry Sinden, who was looking for a longer-term solution in net with Rejean Lemelin soon to be 34 and apparently lacking faith in the ability of the 21-year-old Ranford.
Although the B's didn't need a goaltender given how well the tandem of Lemelin and longtime backup Doug Keans was playing that season, the Moog to Boston announcement came as a bit of a surprise. The timing of the deal was especially interesting since Courtnall had recently tallied his first NHL hat trick against the Minnesota North Stars and had lit the lamp 32 times in 62 contests. Ranford seemed like a throw-in at the time, so while the trade had some mixed reactions, Moog was welcomed to Boston and would soon become a fan favorite for his agile and combative style between the nets.
Moog and Lemelin split time pretty equally until the 1990-91 season, when Moog became the No. 1 and kept that job for three full seasons. In 1988, Lemelin was the better goalie in the playoffs, outshining Moog in the Buffalo and Montreal series, even though the veteran from British Columbia did show signs of what he was capable. Moog actually started the 1988 Stanley Cup Final series, with Game 1 being played in Edmonton, a 2-1 loss in which Cam Neely scored Boston's lone goal and Moog played well, but not well enough. Lemelin would lose Games 2 and 3 before Moog returned for Game 4, initially played at the Boston Garden, but then shifted to Edmonton with the famous power outage and blackout which occurred after Edmonton tied the game in the second period.

After a disappointing loss in the second round of the 1989 playoffs to hated rival Montreal, Moog and Lemelin had an outstanding 1989-90 season, with the two capturing the Jennings Trophy for the first time in Bruins history, while Moog was a finalist for the Vezina Trophy, losing out to Patrick Roy. The team won the Presidents Trophy and while Lemelin and Moog rotated initially in Boston's first-round playoff Adams Division semifinal series against the Hartford Whalers, Moog took over after coming into the 3rd period in relief of Lemelin in Game 4, with the Bruins down 5-2, and facing a 3-1 series deficit if they lost. An epic comeback saw the B's escape with a 6-5 win and Moog went the rest of the way, beating the Whalers in 7, Montreal in 5 and sweeping the Washington Capitals in the 1990 Prince of Wales Conference final. Unfortunately, the B's ran into the Edmonton buzzsaw again, and Bill Ranford made Sinden look foolish for trading him, stoning his former team and capturing Conn Smythe honors as playoff MVP after prevailing in a four-overtime goaltending duel against Moog which set the tone for the series, which ended in five games.
Moog would not take his team to the finals again, but the Bruins reached the semifinals in each of the next two years in 1991 and 1992, beating Montreal both times in the Adams Division final, only to fall to the eventual Stanley Cup champion Pittsburgh Penguins in the Conference finals each time. Tom Barrasso got the edge on Moog in both series, and since '92, the Bruins have not advanced beyond the second round of the playoffs.
Traded with Gord Murphy to the Dallas Stars for Jon Casey (and later retiring after a one-year stint with Montreal in 1998) after a horrific performance in the 1993 playoffs (a first-round sweep against Buffalo after finishing with the league's second-best regular season record) Moog finished his Boston career with 136 victories in 261 games, good for sixth all-time in the team's record books. However, his 36 career playoff wins are second only to Gerry Cheevers for tops in B's history. And, Moog did something Cheevers never could: he beat Montreal in the playoffs. Throwing out '88, in which Lemelin won all four games against the Habs to knock them out of the postseason for the first time since 1943, Moog presided over the elimination of Montreal from the postseason three times: 1990, 1991 and 1992.
I always admired Moog because like him, I am short in stature, so to see him play so well for as long as he did despite not being a tremendous athlete or having the kind of size that has now become a must for most pro goalies was an inspiration to me. I loved his goalie masks as well- the original "spokes" model he debuted with in Boston and used from 1988-91, and then his signature "snarling bear" that local mask maker and artist Dom Malerba designed for him.
This particular sweater was worn by Moog in the opening game of the 1991-92 season, the NHL's 75th season, a 2-1 win over the New York Rangers, in which both clubs wore "Turn Back The Clock" throwback designs to commemorate the league's anniversary. It doesn't have a lot of wear aside from some pilling where his glove and blocker rubbed up against the sleeve cuffs, because Moog wore it for only a few games before exchanging it for a bigger sweater. The TBTC B's sweaters were made of ultrafil knit material as opposed to the airknit fabric that they used in their regular shirts. Also, nameplates were not used on these- instead the individual letters in each players last name were sewn directly onto the back. The NHL 75th patch was sewn on the right breast.
Like all Moog gameworn sweaters, this one features his standard customizations: shortened sleeves and a slight taking up of the hem to reduce the length and how far it would hang down. If you compare photos of Moog's TBTC sweater to those of his teammates that year, you can clearly see that the amount of white on the shirt's body is shorter than the others, as are the sleeves, which on the unmodified TBTC models, have a black stripe at the end of the cuff. In the photos, you can clearly see that they've been altered.
This is the sweater Moog is wearing on the cover of the Bruins' 1991-92 Yearbook and is a great piece of history from one of Boston's best goalies, even if he was never able to help his team to the promised land.
I also have one of Andy's gameworn masks on display in this post. It's a Dom Malerba special, and has good wear- paint chips, puck marks, salt stains and other filth on the inside and is signed and dated "1992" by Mr. Malerba himself. I showed the mask to one of his colleagues at Pro Mask Inc., and he certified it as the real deal. These masks were made only for Moog and because he wore several in the two seasons he used this design, there could be more out there. Regrettably, I've never been able to photomatch this particular mask, but it is a prized piece of my hockey memorabilia collection and was probably worn during the 1992-93 season, as I've seen playoff footage of Moog from 1992, and the backplate of his mask did not have the "Moog" name stenciled on it. Unless this was a model used earlier that spring, it probably was used sometime between September-Dec 1992 and possibly beyond.
Posted by Kirk Luedeke at 8:03 PM

Kirk Luedeke
I am an NHL/Boston Bruins, New Jersey Devils and Prospects writer for the New England Hockey Journal and New York Hockey Journal. I have been with NEHJ since 2000 and with NYHJ since its inception in December 2010